Right of Passage: I Got Called "Faggot" by Some Chesapeake 'Necks 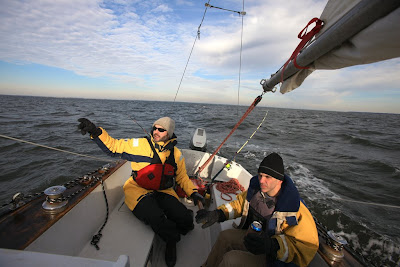 Ha! I got called a faggot and a "gay sailor" over the VHF radio today by some fishing rednecks. Hey, I ain't offended; actually, we all had a laugh onboard about it.

Here's my advice for any sailor who fishes the Chesapeake and monitors VHF channel 68 (fisherman's channel): be poised with a snappy comeback if you inform a passing boat that you're in a sailing vessel because it'll take less than a second for the faggot comments to start flying. Your response will be effective if it mentions sex with the offending 'neck's mother.

I left DC at 6am and fought some of the biggest swells I've seen in 8 years of sailing the Bay. Throughout this slamming off the wave crests, I was towing two poles trying to catch beastly rockfish. It was too rough and windy to have the headsail out -- only had the reefed main keeping us moving. I was passing a fishing vessel towing a ridiculous number of lines -- maybe 15 rods! -- so I hailed him over the VHF to see if he was catching any. I said I was the green sailboat off his port side. He didn't answer, but immediately another voice came over the radio saying in a lispy, exaggerated gay-sounding accent, "Couplea gay sthailors ..." NICE. I was ready on the queue and responded, "Your mom didn't think I was gay last night."

There's always some rivalry between people doing similar sports: kayakers vs. canoers; free-climbers vs. top-ropers; skiiers vs. snowboarders; spelunkers vs. cave-divers; Army vs. Navy -- shit, there's probably even a rivalry between babies who suck their thumbs and those that use pacifiers.

But who's the real tough guy on the water while fishing? Some 'neck from rural Maryland who spends $300 for a day's gas dragging around $5,000 dollars worth of equipment -- nearly double the cost of my entire boat -- from the comfort of his heated cabin? How much skill does it take to drive a stinkpot while towing lines? Oh, that's right, it's called a throttle and it goes two ways: forward and backward. Wow, that must be hard to learn.

Comments:
Hey do not forget the most famous Skateboarders VS Fruit-booters, Those silly things reuire no skill.

We already had the fly vs. gear fishing discussion. In short anyway. You should see 'em when the salmon are running.

"Fruit boots" -- one of my favorites. These are fruit boots, for all you who don't know.

awesome post...i grew up sailing on the chesapeake and my dad used to let me fish off the walk-through transom. i experienced many days of being heckled by moron's in their motorboats. and we gave it right back.

if i enjoy both is that strange?

Is there a term for that? Biaquaphile?

The only bad thing about powerboating are the drivers.

I love that last quote, LB

I'm surprised he didn't ask for permission to board, if you know what I mean.