What a real douche. I've been following his "voyage" since a month after it began. I always thought the guy was loopy but I also thought he was going to try and legitimately continue sailing around the world as many times as he could in 1000 days -- an actual journey. But it's obvious that his 1000 Days at Sea voyage is him merely drifting around at less than half a knot of boat speed in the doldrums of the Atlantic for over a year while the mother of his child raises his son. I have lost all respect for Reid Stowe.

Look at his position for nearly the past year!: 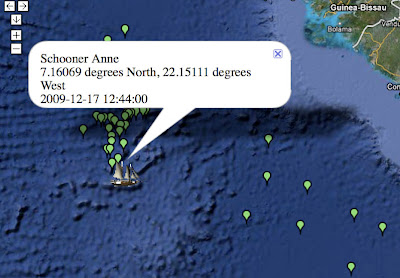 And the 1000-day mark will pass in January 2010 but for some reason, he's decided to drift around off west Africa until June. Get back to land and raise your fucking child, you dirtbag!

I should have listened to the Sailing Anarchy members who've been making fun of Reid for nearly three years.

And WTF is this Mars mission crap?! At first, I didn't think the guy was serious, but from a few posts lately, it's obvious he thinks NASA actually cares that his hippie-ass is drifting around the Atlantic for years. Are you serious man?!?

It's time for me to call Reid Stowe what he really is: a jobless, aging hippie loser who used his charm to coax a 23-year-old girl to set out on a dangerous venture with him because he had nowhere else to go because New Jersey was going to evict him from his slip, then he gets the girl pregnant at sea, so he dumps her in Australia to hitch back to the USA and do the tedious work of raising his child while he wacks off and paints bad art drifting in the doldrums of the Atlantic which is the least challenging place to sail on Earth.

God, that was the longest run-on sentence I've put on this blog, but Reid Stowe deserves it.
Posted by: Lonnie Bruner / 2:06 PM 11 comments

Cities Where I Slept in 2009 (with pictures)

(One night or more spent in each): 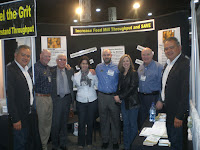 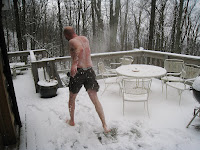 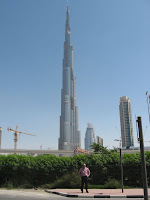 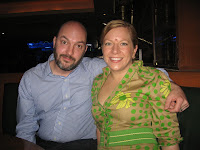 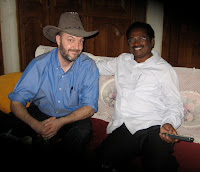 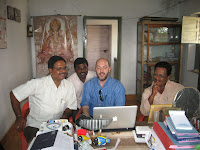 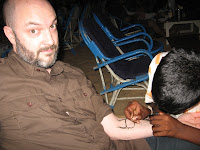 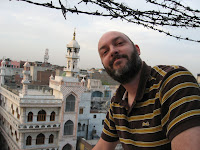 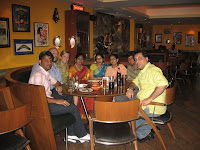 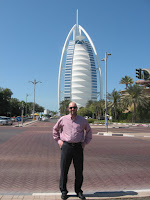 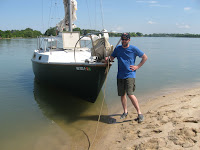 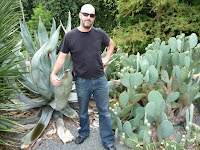 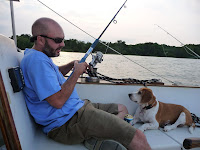 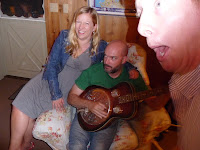 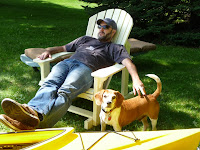 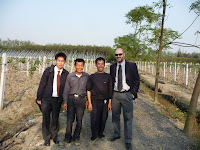 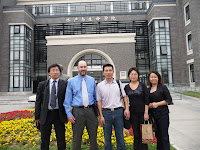 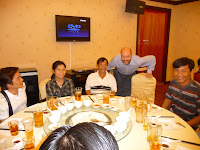 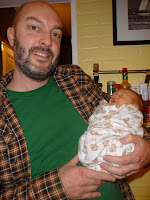 I've been searching for an apt description of the emotion of having a baby. The best analogy I've come up with, and have been mulling for the past few weeks, is that having a baby is most similar to the sensation of your first or second experience falling in love -- not the kind of cautioned, jaded love people can have later in their adult lives, but the powerful, inexperienced connection of falling in love with someone earlier in your life. It's most close to that kind of strong emotion, minus the sometimes off-the-rails component of being in love as a teenager; parenthood is a far more stable and permanent feeling than that. This is the best way I can describe it to someone without kids.

Think way back to one of those experiences when you were a teenager or in your early twenties. Remember how when you went outside on a cloudy day, all you could see was the blue sky and all you could hear were the birds singing? When you fell in love, even if you were in a job you disliked, it seemed just fine and the least of your concerns. Your entire mood was lifted and your worldview was improved in every regard.

Babyhood doesn't know the world of adults. There's no cynicism, violence, conflict, or all the little crap people just accept by being an adult (think of the disgusting adult phenomenon of passive aggression. There's no passive aggressiveness with babies!). Being a newborn is a simple world and a baby is as close to a pure human you'll ever meet. That's the world you enter when you have a baby.
Posted by: Lonnie Bruner / 5:22 PM 5 comments

Let's Get Family and Baby

I'm realizing that people go nuts for baby pictures and comment like drunken sailors so here are pictures of Elliot with each parent: 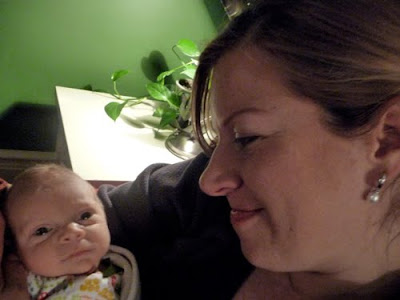 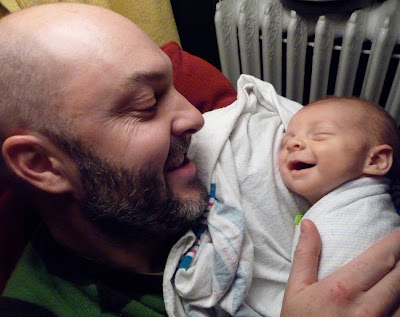 With Grandma (my Mom): 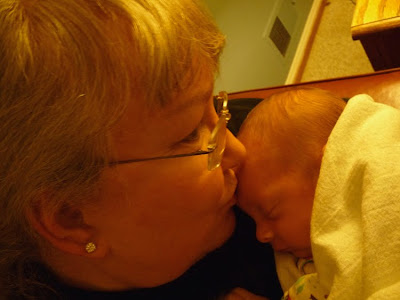 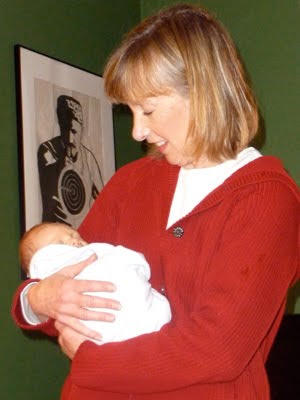 With Grandpa (my Dad): 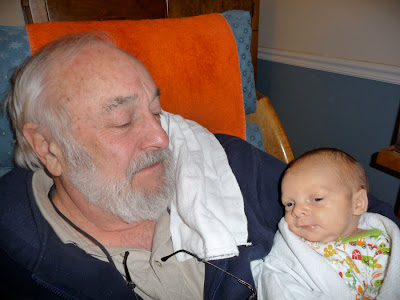 Baby Brief (With a Touch of Gross-out Stuff)

Before I had a child, I told myself I would rarely write about child-rearing experiences on this blog once I brought a human into this world. Childless people have nearly zero interest in reading about the adventures in bottle-feeding, cleaning up shit, and sleepless nights, but since this blog is all but dead, and I'm writing just to hear myself think, I'll lay down a summary and reflection.

I've talked to people who get downright philosophical about witnessing a baby come down the birth canal. I've heard all the gross-out stories about the blood and ripping skin etc. Personally, I didn't find the procedure stomach-turning, nor did I feel like howling at the moon because I'd connected to my primordial past. For me, it was all procedure; let's just get this DONE. But, of course, the real work was done by my wife, Katie. I was surprised by how much hands-on assistance the hospital allowed me to do. Throughout the pushing process, I was basically doing the same thing as the other nurse. That was pretty cool. I watched the whole thing, including the long needle penetrate my wife's spinal cord when she got the epidural at 4am, the grayish-blue baby's head coming out face up, and the massive purple placenta dropping into the stainless steel bowl -- all creating an environment that looked close to a murder scene. COOL. And my son had to be vaccumed out with this crazy suction cup device with a cord and handle.

My advice for dads-to-be in the delivery room is to be as hands-on as the hospital staff will let you -- especially right after the baby pops out. At that point, your wife will be so spent that she can hardly manage on her own. The staff have to give her a wheelchair just to go 15 feet to the bathroom. It was scary when Katie came back to the bed and passed out at the same time she started to vomit, so I could hear the sound of my own wife choking on the puke gurgling, blocking the air in her throat. Luckily, the nurse had some smelling salts on hand -- came out of nowhere -- and a spray of chunkified orange-juice vomit coated my arm and splattered the floor. But thank God for it, because Katie was awake and breathing again. I'm glad I was there to hold her head and make sure the nurse got things done quick. In my limited experience with birth, that seems to be a crucial point in your post-partum wife's health -- so guys, be alert.

The doc handed him to us for a quick picture, and then whisked him off to the Neonatal Intensive Care Unit (NICU) for 15 days -- yes, fifteen fucking days. This is precautionary because premature babies are so vulnerable, but it was torture not being able to have him home immediately.

For two weeks we made the back-and-forth trek to the hospital to sit with Elliot amongst the loud bleeping alarms of the 500 monitors they have hooked up to all the preemies. The aesthetics of the place do not appear conducive to proper child development, but we were assured that being there was the best thing for him. Christ, the kid can't even see solid shapes right in front of him so I guess it doesn't matter that multiple nurses are handling him with rubber gloves and wires and hoses are running into all his orifices. We just toughed it up and kept visiting him for five to seven hours a day.

Here's my little dude on the night before I thought he was getting out. He actually got out five days after this photo was taken: 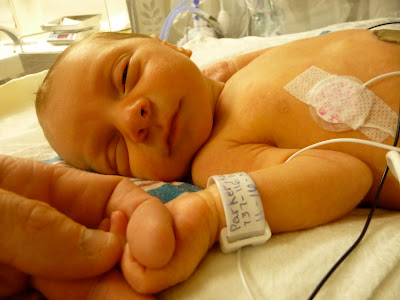 All of this is a lot of work, but one of the biggest tasks is playing chief of staff to my wife by handling the many phone calls, emails, text messages, facebook updates, and visitors. By far, in the first day or so of birth, that took up more of my time than any other single thing. Granted, I'm not complaining -- I'm a social person, and I LOVE people -- but I didn't expect such an outpouring of generosity and love from so many family, friends, and neighbors. Babies make you realize how fundamentally good people are. At least four of my neighbors brought over home-cooked meals, the gifts from all the family and friends are a TREMENDOUS help, and all the offers of support were just mind-blowingly generous. I wonder how I'll ever properly thank everyone.

The short story is that I've had much harder sleepless nights on overnight sailing, airplane, and camping trips -- MUCH harder. I'm an insomniac by nature so the continual waking up, changing diapers, bottle-feeding, then trying to go back to sleep is not that different from my normal nights. I had just been warned by so many hundreds of parents that I could give up sleep that I was expecting the worst but it really is not so bad. But who knows, maybe the worst is to come.

Thank God for the Home Bar

I got some weird sickness two days ago so I sequestered myself in the basement bar for two nights. I felt like crap, with a fever of 100.7. Who knows what it was but I was not giving my baby my germs so I stayed down in the bar and wore a surgical mask when I went upstairs. My hands are now cracked and dry from obsessively washing them so much. But having that wood-walled man-cave in the basement is a nice get-away, and thank God for a quick martini by the Christmas tree after the baby's been changed and fed and everyone but me is asleep and I love my family so goddamn much -- seems all is right with the world. That is a feeling that's hard to put into writing. Maybe the below photo I took last night sums up part of that feeling. Cheers everyone, and Merry Christmas. 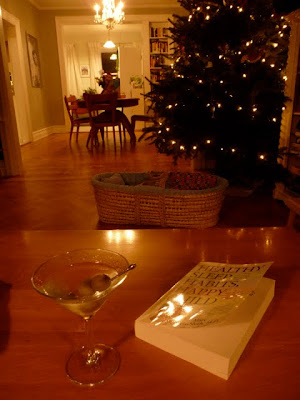 I like this photo I took of my kitchen window after the first snow of the year: 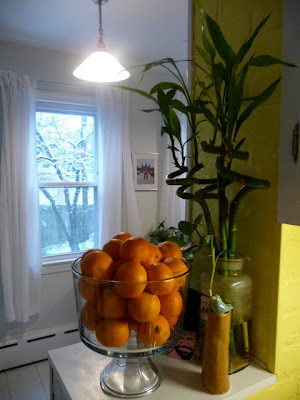