The Word "Doomsayer" Begins with a "D". So Does "Douchebag".

Well, well, well, it looks like our recession is coming to a close in the foreseeable future, according to a survey of the National Association for Business Economists. If it's correct, this recession will have lasted -- gasp -- just under two years.

God damn, I can't stand doomsayers. This crisis really exposed them for the weakling, cowardly, ideologically-driven USA-hating ninnies that they truly are. The biggest D's are the libertarians.

The worst offender was that Captain Douchebag Jerome Schrift (or was is Peter Sift? Jeremey Shaft? I can't recall. Whatever, history will never remember his name). Do you remember this fuckface doomsayer? He'd be on Bloomberg every other night telling everyone to abandon the dollar because its imminent collapse was nigh. He was economic advisor to the Ron Paul campaign --- likely another name no one will remember in 20 years.

And these libertarians actually believe the words coming out of their mouths. The other day, a libertarian wrote this to me in an email:

"The Great Depression -- it wasn't market forces that causes it, it was the Fed and Hoover and Roosevelt's policies, which are similar to Obama's today."

This is part libertarian fantasy, and part correct, but not for the reasons proposed. It truly was the Fed that made the crisis worse --- by contracting the money supply rather than a (Keynesian) expansion of it like Bernanke has done. What's been done in the past year is called "learning from history".

This recession will last just short of two years, very likely, when a year ago there was a chorus of doomsayers saying it would be worse than the Great Depression. Please. If it were up to libertarians, we'd drag on for 10 years with collapsing prices and 25% unemployment to let the "wonders of the free market" do their precious work.

I have no time for fearful people with nothing positive to say and no honest workable solutions to large problems. Libertarians need to get out of the way and stick to wankfests at the Cato Institute while us Keynesians roll up our sleeves and get the economy moving again --- in less than two years, thank you very much.
Posted by: Lonnie Bruner / 12:52 PM 1 comments

12 Straight Days of Tuna for Thousands of Miles 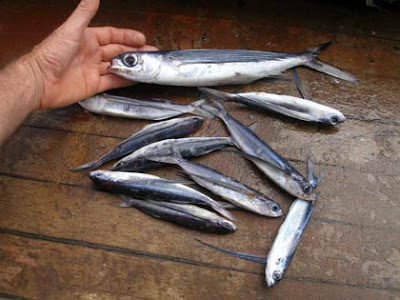 I know everyone is supposed to believe that the ocean's fisheries are on the brink of total collapse, but I follow a blog written by a guy who's on day 765 of a 1,000-day worldwide sail, and today he wrote this from the South Atlantic:

"For 12 days straight the sea has been full of small tuna, constantly from dawn 'till dusk, feeding on tiny flying fish. Often fish will follow the schooner, but these are in every direction as far as the eye can see and through the underwater window. Since the tuna are everywhere and not just with me, it leads me to believe that the sea for almost 1,000 miles is full of tuna and flying fish! I have seen schools of fish pass, but never thick across the sea for weeks on end. This is a good sign and gives us hope for the life in the sea."

Yes, yes, I still believe most of the doom and gloom about the ocean's fish stocks, but stories like the one above make me wonder. Maybe there are just way more fish far out at sea, while the fish that used to be close to land are nearly depleted. Wait, that can't be right: Chesapeake Bay Foundation reported that for 2008 striped bass were present in the Bay at levels close to that during Captain John Smith's time in 1609.

I suppose it's always good to be a bit skeptical of environmental doomsayers, especially about something as vast as the world's oceans. Or maybe I'm just a sucker for the power of anecdotes over established science.
Posted by: Lonnie Bruner / 7:32 PM 0 comments 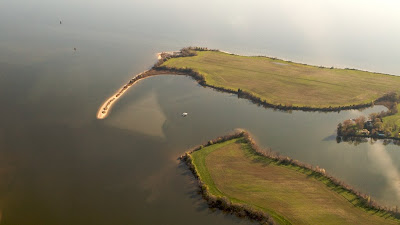 I anchored my sailboat over the weekend at the very tip of that sandy point to the left-hand side in this picture. -->

It's La Trappe Creek, located in the Chesapeake Bay. This is a rare anchorage for the mighty Chesapeake because the water stays deep right up to the land. We pulled my sailboat 12 feet from the sand and anchored, despite my boat's draft of 4.5 feet. It was COOL.

We set the hook in the pitch blackness, bleary-eyed and pissy with one another. Sailing at night to get to a place like La Trappe is a real effort -- especially if, like me, you like to keep the beers slowly flowing and the cigarettes slowly smoldering. Mixed with tiredness, these activities put a significant strain on the mind and body (in a good way though). Now, if I were a cocky person, I'd quote Sir Francis Chichester and give myself a pat on the back right here.

"Any damn fool can navigate the world sober. It takes a really good sailor to do it drunk". -- Sir Francis Chichester

But I'm not a cocky person and I've never considered myself a "really good sailor", so I'm not with Chichester on that one. However, we had been sailing for hours and hours through the blackest pitch blackness, often wondering if we were going to run aground, straining to keep our dry eyes open to avoid crashing into unlit concrete marker bouys, trying to figure out which of the myriad tiny blinking red and green lights in the distance was the one we wanted, while the boat shook and rolled and the brass lanterns clinked and flickered in the humid salty darkness -- all that pushed the nerves, to say the least.

After I made the damn-fool mistake of trying to anchor too near the channel with too little depth and nearly being plowed over by fucking Rodney Dangerfield in his you-scratched-my-anchor stinkpot, my observant crew made the excellent suggestion to anchor off that beautiful point in the above aerial photo. Thank god we did.

The next morning, after grilling up the 25" rockfish I'd caught the previous day, we noticed a seaplane flying close overhead. I've seriously never seen a seaplane in all my Chesapeake days, but here was one right overhead and it appeared to be coming in to land. With all our eyes affixed on it, that seaplane set its pontoons onto the water about a hundreds yards from us. My gregarious first mate Colin, of course, ran over to chat.

After 15 minutes, the seaplane started the motors and off it went, back into the air and over the horizon. Colin came trudging back to the boat and said the guy had just landed his plane so he could take a piss behind a tree. Man, this is one of those things you don't think about occurring -- that some pilot would've forgotten his empty Gatorade bottle and had to land a seaplane on a body of water to relieve himself.

La Trappe Creek is an awesome anchorage, but summer weekends turn into a hardcore redneck/stinkpot extravaganza as the afternoon and evening progress. (I like rednecks most of the time so I can use that word). Man, the funny-ass things Bay 'necks do! I witnessed here a massive 11-boat raft-up and teenagers flirting, drinking and sucking face with one another in small boats with motors that were so high-horsepower that the sterns were close to swamping. Later, they fired up a big-ass bonfire and hooted and hollered late into the night. Also, one boat put on an ad hoc fireworks display, interspersed with a chorus of surrounding boats honking airhorns in loud approval of the show (ok, I honked too).

I recommend La Trappe Creek as high as I can. It's a damn nice place to spend Memorial Day weekend -- at least if you're flying in an airplane and have to take a piss real bad.

The Unrequited Rivalry Between DC and Baltimore

Every once in a while I'm reminded that many people in Baltimore have a strong, usually negative, opinion of my city, Washington DC. The strange part is that people who live in DC either hardly remember that Baltimore exists or they really like the city.

This is why I call it "unrequited" because while people who live in Baltimore seem to spend quality time fretting about and consciously disliking DC, we hardly even realize it's going on.

I suppose this is like the rivalry between Cambodia and Thailand. People in Cambodia HATE Thais, while the Thais generally react with a proverbial pat on the head and an, "Aw, isn't that cute."

That reminds me, I need to get up to Baltimore soon. I miss it no matter what it thinks of me.
Posted by: Lonnie Bruner / 4:17 PM 14 comments

I have a friend who can chew the top off a beer can.

My friend Colin has been able to chew the top off a beer can for so many years that I take that talent for granted. Sometimes I forget what an honor it is to know someone like this.

Here he is two years ago during my annual guys' sailing trip showing off this awesome skill. The video is grainy, but you can see his technique of tilting the mouth of the can so his left lower canine tooth actually cuts off the entire top as he turns the can. After he's done it looks about like this -- which you can't see in the video.

I've been going to the gym for the past month with my old friend J.C. who's from Venezuela. Since I've known J.C., he's shared stories from his family who are living under the Chavez regime. I am constantly amazed at the authoritarianism that goes on that you never hear about in the USA.

Here are two pieces of commie bullshit that J.C. has mentioned about Venezuela to me in the past week:

1) Venezuelans cannot send their own money out of the country. They are also restricted by a government-imposed spending limit of $2,500 per year when they travel abroad. J.C.'s father, sister and brother sometimes travel to other countries and they have to be strict with keeping all their receipts to avoid fines and government harassment if they exceed the foreign spending quota. J.C.'s father carried a three-ring binder when he recently traveled to Spain so he could keep receipts for things as small as a cup of coffee. Chavez maintains a black list of 600,000 people who are suspected of somehow sending money out of Venezuela.

2) The mayor of Caracas is in the opposition party so Chavez created a pro-Chavez governorship in the Caracas district. This would be like if the mayor of DC, Adrian Fenty, was a Republican, so Obama just decided to create a DC governor out of thin air to reduce Fenty's power.

I've never met a Venezuelan who likes Chavez but a fair share of American lefties who do. Weird how that works.
Posted by: Lonnie Bruner / 12:09 PM 11 comments