Yesterday I arrived in Austin Texas by airplane and witnessed an American soldier's flag-draped coffin being unloaded onto a hearse while his mother wept in the rain on the tarmac, her body so overcome with emotion that she was shaking -- heaving up and down.

This makes war come closer to me than before. From the plane, I could see this mother's eyes.

When we took off from Dallas we were told to wait to exit the plane so the military escort could depart first -- also that we'd have to wait for our luggage so the coffin could come off first. All this sounded pretty routine and the gravity didn't hit me at that moment.

We touched down in the rain and a big van pulled next to the plane followed by 15 motorcycles and a hearse with small US flags on the front windows.

Out came the family -- a group of 25 -- only with one umbrella. I suppose all of them were so overcome with emotion that no one remembered to bring more than one umbrella.

I unloaded my carry-on, and moved toward the exit, but stopped to watch the heavy sadness unfolding below me. I looked out the plane window and directly underneath me, they wheeled up a black conveyor and waited. The family was directed closer to the plane to the point where I was facing the grieving mother through the small airplane window only 40 feet down through the drizzle.

There was more waiting and I could feel the tension as the family held onto one another in mournful anticipation.

They just looked like any suburban family I've known -- a lot like mine. Just normal people waiting for a dead loved one.

Finally I could see the corner of the American-flag-draped coffin moving slowly out from directly underneath me into the rain. The coffin was wrapped in red, white and blue, and sitting on a shallow pine cart. The six military escorts came forward, each to carry the coffin to the hearse a few feet away.

I couldn't believe watching this crying mother so closely. Her image is burned into my memory. There's nothing like this -- to see it personally. More people should have to see this. No one should take going to war lightly.
Posted by: Lonnie Bruner / 10:04 PM 2 comments

Had Me a Stroll Through Some Turkey Houses 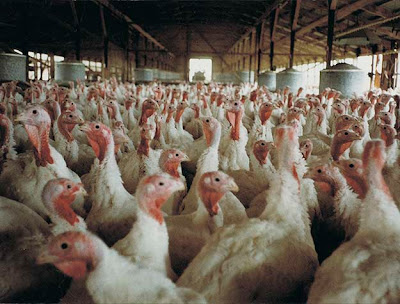 I walked around inside several turkey houses yesterday for the first time.

Amongst these thousands of ugly animals, I kept thinking, 'what's all the fuss about this being inhumane?' It certainly is not. In fact, the grower has huge incentive to keep the birds in the best of health, otherwise the animal dies and is a loss for the company.

When talking to most people who live in and around cities, the feeling is that animal rearing facilities are horrible hell holes. This attitude is also in force in the book Omnivore's Dilemma which I read a year ago. In the entire book, it's just assumed that "industrial" animal-rearing facilities are cruel. I disagree.

First, broiler chickens and turkeys are not raised in cages. They are raised in open-floor housing that's nearly double the size of a football field -- huge. They do pack a massive number of birds in that space, as you can see in this picture, but as soon as you walk amongst the birds and they move out of the way, you can see that they have plenty of room to walk around. The only time these birds are in cages is the few minutes when they are put on the truck to the slaughterhouse where they are very quickly killed.

Most poultry raised in tight cages are for eggs, so, ironically, if you are an ovo-lacto vegetarian -- but not vegan -- your ethical choice is arguably worse than someone who eats meat but not eggs. How ironic. (BTW, I do not believe that keeping layer chickens in cages is cruel).

I also visited a house where they had just introduced 2-day-old turkey poults. These little guys have to be taught how to eat, drink and sometimes stand. I noticed that several of the baby birds had fallen over and I thought they were dying, but apparently these birds just aren't strong enough to stand on their own so it's the farmer's job to stand them back up by hand and get them tromping around again. It was sweet watching the farm manager give such care -- kind of like the time I was in the Philippines and the shrimp farmer actually gave little massages to the shrimp he thought were suffering from cramps.

I have yet to visit a slaughterhouse but I have seen video of how meat animals are killed. This also is entirely humane to any reasonable person.

People -- especially those in urban areas -- should feel fine about the meat they eat. Maybe most people are squeamish and delicate about this, but if they visited a poultry house, they would see that it's perfectly humane and as professionally-run as possible. If you're unsure how you feel, get over it or become a vegan; those are the only two legitimate choices.
Posted by: Lonnie Bruner / 10:02 PM 10 comments 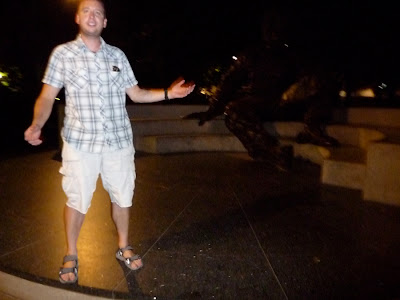 The other weekend I realized I have two man caves -- one in my basement with a full bar, and a second in the garage when I set up a wooden table and plastic chairs as a smoking lounge next to the 50-year-old car.

Found myself there with my old friend Jason at 3:00am, smoking and waiting to perhaps catch late-night activities in the alley behind my house.

Jason and I had mixed rum-heavy Zombie Cocktails after everyone ate a bushel-load of crabs and left. Man, this is why I love having a home bar. At 3:00am while listening to sea chanteys on the stereo, Jason and I were grinding ice, squeezing lemons and limes, pushing pineapple through a strainer, measuring brown sugar and bitters, and pouring Bacardi 151 into a cocktail that was created by Don the Beachcomber back in 1934.

And then we took advantage of the fact that we were in Washington DC: while sitting in my garage smoking Marlboro Lights, we decided to pump up the bike tires and head down to the Mall and take a dark tour of the monuments. I tore up the garage for the pump, and we headed down.

Touring monuments in the daytime sober is not nearly as good as taking a leisurely bike ride in the cool summer evening with a good buzz rolling when no tourists are in sight. That's the kind of drunken moment that can get me all philosophical and nearly teary-eyed.

Sitting in Einstein's lap felt like I understood the Theory of Relativity -- looking up at the stars in the sky and down at the solar system inlay in the black marble. The glowing white stone of the World War II Memorial made me babble about my late grandfather who was in the Navy from '33 to '63 -- a subject that gets me. And the Korean War Memorial, man -- it's really worth seeing lit up at night.

Jase, in the lap of genius: 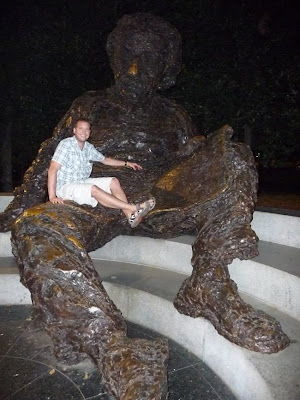 And looking for the Big Dipper in the inlays: 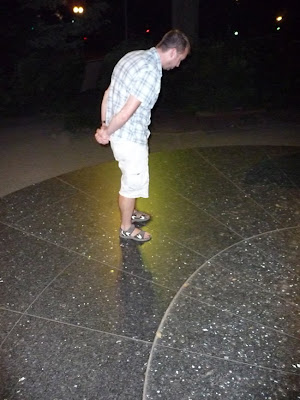 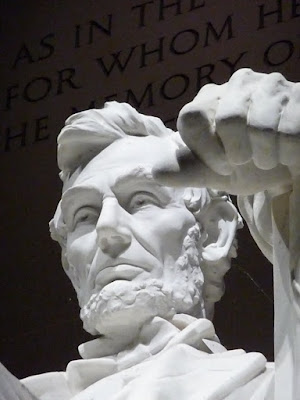 The Gettysburg Address at 4:00am: 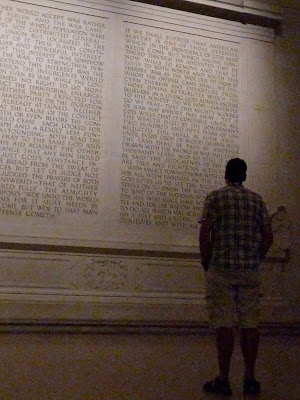 That eerie view of over-sized soldiers in Korea: 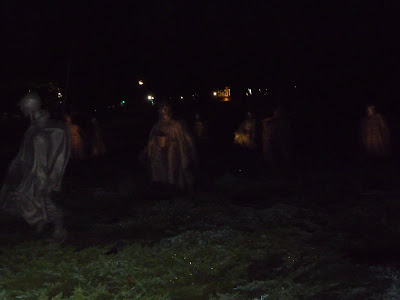