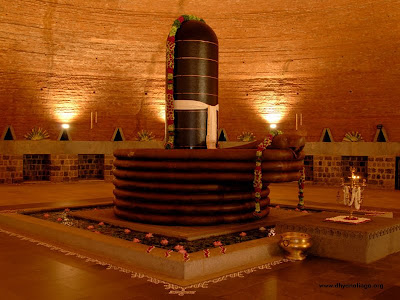 I used to think yoga meant urban yuppie-hippies in the US doing stretching and breathing exercises on purple mats, but after I spent a day in Coimbatore India, I discovered that yoga actually means worshiping a gigantic snake statue coiled around a black penis-like structure, then hugging an underwater ball made of lead in a subterranean pool.

After a business meeting, we had some time to kill so my distributor took me to the Isha Yoga Center near Coimbatore. Driving toward the mountains, the paved road ended and our Ambassador (Indian car) bounced along a winding dirt road -- red dust coating everything -- nearly giving me motion sickness. 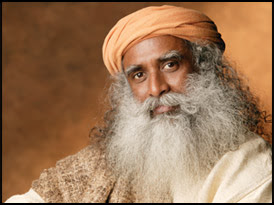 Along the way were billboards of a man with a long white beard, referred to as “the mystic and visionary Sadhguru Jaggi Vasudev.” He looked like a cliché version of a cult leader and I started to wonder what the fuck we were about to do.

I knew we were headed for some “yoga center” and figured I’d humor my hosts by doing stretching and ohming for half an hour. But as we pulled into the dirt parking lot alongside a tour bus, I saw a sprawling complex of oddly shaped buildings scattered throughout the woods at the foot of the nearby green mountains, and I knew things were gonna get weird when I saw people dressed in white cult-style robes.

Wait, yoga is some kind of primordial religious cult??

We checked our shoes and socks and started the tour. The guide explained in a soft sincere and serious voice what we were about to see, and made sure we knew not to speak while viewing the statues -- very important.

The bottoms of my feet burned as we walked on sun-scorched stones toward the first building. It was a subterranean swimming pool, reached by descending brown stone steps underground where half-naked men were swimming in murky water and hugging a submerged lead sphere. No one was speaking -- just the sound of water. Soon, I felt the urgent need to leave so I climbed back up the wet stone steps with my bare feet and pant legs rolled up to my knees.

Next, we approached a brick dome structure. I entered, and was directed by a bare-footed man in a white robe to place a flower in the shallow water surrounding an eight-foot tall coiled snake statue. The snake was protecting a big black monolith. All along the circular wall were square cutouts set back three feet and people were sitting in them cross-legged, silent. If someone had proceeded to sacrifice a goat at that moment, it would not have seemed out of place. 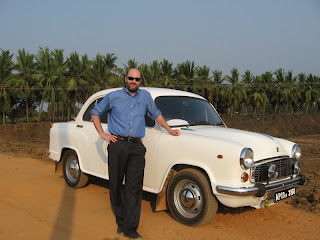 I am not religious or even a “spiritual” person. I have a high level of difficulty believing in anything beyond the natural world. I sat there in the lotus position facing this giant snake and phallic statue and felt increasing uncomfortable -- but mostly, just silly. It was like I’d stepped back 4,000 years to worship idols; something in my Christian upbringing was telling me to run. After four minutes, I couldn’t take it any longer. These silent ohmers and their false idols were giving me the creeps. I headed to the outdoor cafeteria to get my free food eaten without silverware.

I’m glad I got to witness all this. It’s like seeing how religions were before monotheism. But I suppose praying toward a snake statue isn’t so different from rubbing beads together and praying toward a statue of a woman who supposedly was the only person in history to have a virgin birth.
Posted by: Lonnie Bruner / 9:44 PM

Good to see you have an Ambassador too. Those things have the loudest horns in the history of the universe. It's as if a louder horn means no, really, I'm serious: Get out of the way! Keep documenting these great experiences dude!

hey, well yeah i dont blame you for saying all this. i was a resident there for a while, and had i gone there before taking the program, i would have had freaked out just as you did...
back to your world must have felt amazing :)

Well, it was quite a bit less than a "freak out" -- I thought it was weird and cultish, but mostly interesting.

Yes, I see, a penis wrapped in a penis, wrapped in an enigma inside a cunundrum. Thank you for the reportage. Seriously, thanks. Are you smoking that thing or t preparing to eat it. You capture a cigar and a pig in a blanket simultaneously.

Was the "snake temple" visit on the same day as the shrimp farm?

If not, you really need to invest in some different colored shirts.

ps, solid blog by the way.

I travel very light -- carrying only three dress shirts for a month-long visit. Also, I tend to dress like the local people we meet: khakis, blue shirts -- very conservative. I'm not in this for fashion. I'm in this to make money.

hehe well i think as long as your survived, you're ok :)

The underwater ball is made of mercury. And supposedly, the dhyanalinga has a solidified mercury core as well. The phallic shaped dhyanalinga is strategically set within a water-filled pool representing the yoni (vag). The linga is the symbol for shiva- or his manhood. Isha yoga is a shiva cult, pretending to be a non-religious spiritual group.

Well, if it truly is solid mercury, doesn't that defy the laws of physics? The fact that the Isha center claims that it is solid due to alchemy makes that claim highly suspect.

FUCK YOU MY MOTHER FUCKER...YOU WHITE ASSHOLE KNOWS ONLY TO FUCK YOUR MOTHER AND SISTERS,, YOU HOMOSEXUAL IDIOTS DONT KNOW ANY SHIT BOUT ISHA YOGA.KINDLY CLOSE ALL YOUR NASTY HOLES AND BE IN USA.AND DIE AS A SHIT IN USA..IF GET TO SEE YOU WILL A DRILL A HOLE IN PENIS AND HANG..WHIT E FUCKER..

wow you dont even understand wat it is... y do you even say shit about it.. its not even a fucking idol... know your stuff before you say anything honestly..

U have to be receptive in life to experience and understand anything thats new and has not been a part of ur earlier experiences...unless u r open to new experiences nothing new would make sense!!