Last Saturday the wife, dogs and I sailed to the Wye River. We'd caught crabs beforehand at the dock and put them in a cooler to eat later. After hours of sailing across the Bay, I reached in with tongs to pick them up to put in the pot of steaming water, and as you can see from the below video, blue crabs are REALLY aggressive and if they pinch you, you will bleed like a murder victim.

Most people only see crabs when they're dead and red and headed to your mouth but they don't realize what assholes they are when they're alive. My wife found that out the hard way when one pinched her finger and she bled for nearly an hour.
Posted by: Lonnie Bruner / 5:12 PM 3 comments

More Evidence of the Chesapeake's Health

I couldn't resist re-posting this fishing report that I found on a Bay fishing message board:

I have to prelude this by telling everyone that this year has been stellar when you talk about catching rockfish. Methods of catching them has varied depending on the locations but most importantly we know for a fact that the rockfish population in the Chesapeake is strong to say the least. Regardless of how many fish we have caught this year, what we experienced on Friday morning takes the cake.

After about a 25 minute boat ride, we got there and had the spot to ourselves. 7:30AM came and I just happened to turn around and scan the bay for signs of fish. Bingo. I saw a few birds working about a mile from our location. Immediately we all agreed to head over and scope out the situation.

What we saw as we got closer to the birds shocked us all and dropped jaws. I thought I had seen a few birds and I was right. What I couldn't see from the distance was a tremendous school of feeding rockfish just tearing up the surface. This school was gigantic and had to be every bit of a half a mile long. The best part was, no one else was around except us. Rockfish were going crazy churning up the water completely surrounding us. They were feeding on what I have always called silversides, little 3" thin semi-transparent baitfish that others may call spearing or bay anchovies.

We started casting surface plugs to them and was averaging 3 or 4 strikes per cast. A fish was guaranteed almost every cast. The most intriguing part about it was that these were not your typical summer schoolie rockfish. They were big and hungry. Almost every one was over 25 inches with some of them over 35. We had our over/under 28" limits for all four of us in 25 minutes.

This is when it really began to get interesting. Typically, when you find fish breaking like this it might last for 35 minutes, an hour if you are really lucky, and then they will disappear deep again. This is what separated this trip into a whole other category. The fish didn't feed for an hour. Not two hours. No these rockfish either really liked what they were eating or the fish gods were smiling over our boat this morning, because this same group of rock fed--nonstop--for get this--SIX HOURS. They were moving really fast and we constantly had to stay on the outboard to keep up with them. After it was all said and done with, we had followed this same school of fish for 23 miles. Totally unreal.

How many rockfish can you catch in six hours of nonstop bailing rock on every cast between four people? I have no idea. We lost count but had a serious conversation afterwards and felt comfortable saying that we easily caught somewhere between 200-300 rock, almost all of which were over 25 inches. None of us could lift our arms over our heads afterwards and I personally was bleeding from almost every appendage. My thumbs were so raw that I couldn't do anything but hold a cold beer for 24 hours to cool the burning.

After about an hour of catching them on topwater I got so freaking tired of dealing with the lovely combination of thrashing boated rockfish and big treble hooks that I had to switch to something with a single hook. I caught them on everything i threw at them, bucktails, spoons, swimbaits...but I settled on a 7" white bass assassin on a jighead as my bait of choice for the rest of the day. They would hit this bait SO HARD that it would take the rod out of your hands if you weren't paying attention. It was amazing seeing all the feeding fish around us. They were literally jumping completely out of the water all around us.

I've caught a lot of rockfish in my few years around, but I've never seen such a huge school of rock, all of such quality size, that fed for so long in one morning without ever disapearing 23 miles across the bay. It was totally unreal and I think may have been the best day I have ever had on the Chesapeake. 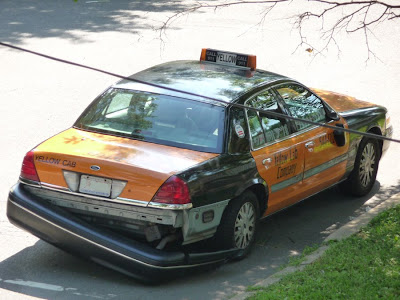 Every day around lunch time I watch my next-door neighbor stumble up to his door drunkenly after his all-night shift. And he is REALLY hammered every time. For example, today, he opened the screen door and started knocking into empty air. I suppose he thought the main door was closed so he just knocked into nothingness.

Today I was doing some painting outside when I heard him cursing and shouting at someone -- maybe to no one in particular. A sure sign that he was plastered. Then I noticed his cab.

The rear bumper was dangling off and dragging the ground and his side view mirror was smashed and dangling by a single wire. As I walked closer, I saw that the entire right side had dents all along it -- an obvious side swipe of another car or a guardrail.

I hope he doesn't kill someone. Maybe I should report him. To all DC residents: perhaps be safe and choose the Muslim cabbies. At least they're teetotalers.
Posted by: Lonnie Bruner / 4:30 PM 8 comments