Even the most skeptical view has Obama winning at 273 electoral votes.

1 - Polls are worth following, especially on a state-by-state basis. For all you idiots that say "I don't believe polls," I'll remind you that opinion poll averges predicted the John Kerry loss down to the 10th of a percent at 2.4% from Labor Day to Election Day.

2 - The best that McSame has done in the past three months in national polls is the bounce he got because of the RNC and Palin announcement. That bounce is already on its way down in the national polls. See this graph from Real Clear Politics: 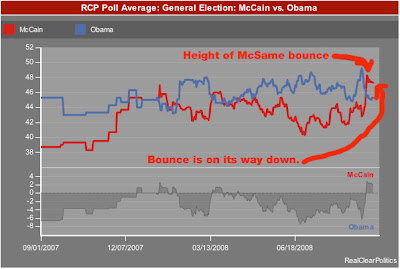 3 - When Mondale announced Ferraro, the bounce he got over Reagan lasted several weeks, so we may not see the national polls recover to their real level until next week. It may be quicker because it seems that 98% of everything McSame and Palin have said lately are egregious lies.

4 - During McSame's bounce --- the best he's EVER done in the polls --- the state by state polls show an Obama victory at 273 electoral votes. Here are my stats below for this skeptical view of an Obama victory. This assumes that Ohio, Virginia and Florida all go for McSame (even though a poll released today shows Virginia at +4% Obama): 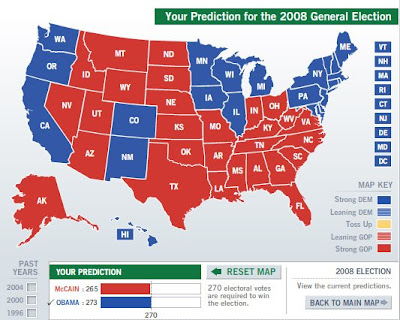 5 - Below are some polls for the "swing states" during McSame's best performance period --- the week of 9/4 to 9/12 from the above map. Again, this is supposed to be the BEST time McSame has done, and he's already headed back down as we speak. "RCP average" is the average of all the polls. This is the best way to find a number that's closest to reality.

I honestly think people should "never try and predict anything, especially the future," but it isn't looking good for the angry-ass Melanoma-laden grandpa and Caribou Barbie.
Posted by: Lonnie Bruner / 1:22 PM

Comments:
I hope you're right. I'm also in the predicting mood, and I predict that Palin's house of cards will come crashing down through the long month of October, if not before...the trouble with troopers and all that. It's simply going to get less believable and more annoying each time she simply "declines to participate" in a legal probe.

The real clear politics site is fantastic, thanks for the tip.