What it's like to catch a shark from the beach at night. 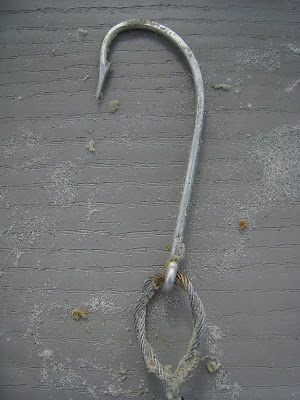 Last night I hooked a shark off the beach here in Wrightsville Beach in the pitch darkness. The feeling of reeling in an unknown fighting animal caught on the end a thick steel leader attached to a plastic line and a fiberglass pole is one of the best sensations I know. I feel sorry for people that don't understand that thrill so I'll try and convey it to the non-fisherman.

I'm staying at a friend's beautiful beachfront property that I couldn't afford to rent even if my salary tripled. I consider myself privileged to be here and owe sincere thanks to the good people that invited me.

Earlier in the day, I'd been catching bluefish near the inlet. I'd rigged up a shiny spoon and was tossing it out, snagging small bluefish along the way. The shimmer of the metal attracts those sharp-toothed buggers like mad and every third cast I'd hook a 12-incher. Loads of fun. After I filled the bucket, I had enough fish to use as bait for my desired conquest later that evening: beefy Carolina shark.

I bought a shark rig at the tackle shop for $10. It's a six-foot steel cable attached to a menacing hook --- the kind you put away when children or dogs are around. It looks like a torture device from the movie Saw --- like a weapon. Just a mean metal shark grabber.

That evening our group had settled in for board games and drinks. I was enjoying the game but couldn't keep my mind off the sound of the crashing waves in the distance and what I knew was waiting for me out underneath. I couldn't concentrate on anything except the multiple dark-n-stormys I was consuming to give me courage to wade into the breakers for the first cast.

I'll be honest, I have a slight anxiety about walking into the dark ocean and my body was already tired and aching from all the day's activities --- trying to surf for the first time, hauling in a dozen bluefish under the hot sun, and fiddling away on my yellow ukulele.

The board game continued but my mind was elsewhere. I kept looking at the clock and feeling the excitement of the possibility of a sharp-toothed catch. When midnight rolled around, I was thinking of bailing out and just hitting the sack. God, I was nearly falling asleep on the couch during the last stretch of the game. I was solidly perched on the fence about shark fishing later on.

The game wrapped up around 1AM, and I was about to mope upstairs to bed when Jim said to me what every quality male friend needs to say when a man is about to forfeit doing something really cool. At that moment Jim called out to me as he was putting away the game pieces: "Hey Lonnie, you gonna puss out on the shark catching? Ahh ... poor baby's tired." Thank god for a friend's comments like this because it got my goat. After that, I was like fuck it, I'm gonna power through the tiredness and GO.

I grabbed my ziplock bag of bluefish heads, my surf rod, a metal bucket, a small flashlight I scrounged from a kitchen drawer, my four-dollar fillet knife, four beers (all different brands), a PVC-pipe rod holder, and headed across the grassy dunes to the moon-lit beach. Somehow, I managed to coax Chris to come with me.

At 1:00 AM, the beach was devoid of people. A warm five-knot breeze was blowing off the ocean and the wave action was light. From north to south, endless water and sand, with the faint glow of the town and the mostly dark beachfront houses behind the dunes. And it was dark. Real dark.

Down by the water, I dug the rod-holder into the hard-packed sand while Chris pointed the flashlight so I could see what the heck I was doing. Then out came the bloody fish heads and I hooked one through the skull with that beastly beast of a shark hook.

In order to fish from the surf, you cannot just cast from the dry sand or the bait will land in the breaking waves and quickly come washing back to shore. The only way to get the rig in the right place is to wade into the dark water and huck it far past the breakers. From reading this blog you probably think I'm a fearless drunk idiot, but I'm also honest, so I'll say this: wading waste deep carrying a pole with an dangling animal head dripping blood at the end of a line made me cautious and --- reluctant as I am to say it --- nervous. I doubt there's any human who could walk into dark seawater without some trepidation. But the thought of the possible catch drove me onward.

The darkish white breakers rolled toward me and began soaking me to my waist. I could hear sounds and movements all around in the murky water. But my keen understanding of real risk calmed my nerves; shit, I've got more of a chance of getting hurt in a car than in this setting. Quit being a pussy, LB. Shake it off. I slogged through the waves and into deeper water until I could hurl the line the right distance.

After I cast it over my head and heard the line whizzing out, I splashed back to Chris waiting on the sand, brought in the slack, let the line hold taut, and set the butt of the rod into the plastic rod holder that was spiked and leaning into the hard wet sand.

And then we stood and waited.

I don't go fishing expecting to catch something. People who feel that they must bring home a fish set themselves up for disappointment. My desire is to sit around a rod, waiting in calm anticipation, drinking a few brews. That's the fun for me. If I catch something, that's an added bonus, sure, but it's not the driving force in my mind during an outing. This is the only way I've been able to maintain my interest in fishing since I was a kid.

Chris and I chatted and mused at how clear the stars are once you step outside the pollution in the city. It's just god damn beautiful. All the while we're keeping an eye on the end of my fishing rod and the taut line, looking for a bite. The rod tip moved a bit when the breakers would pull the line, but I reassured Chris that that kind of pull was not a fish --- just wave action.

After a while, the tiredness caught up with Chris and he walked back home to watch TV and go to bed. But I remained, enjoying my surroundings and feeling more awake than before.

After 10 minutes, I noticed that the breakers were pulling the rod a little more than normal. Or was this a fish pulling it? The end of the rod started to slowly pull toward the sea so I grabbed it and gave a jerk only to receive a long heavy pull in the opposite direction, then the drag released and the reel started to whine. Something was pulling it, shit. Something bigger than a bluefish, for certain. I gave it another pull and the rod bent hard over and the line started to peel off the reel in a sound that is one of the most beautiful on earth: the sound of a fish running with the bait in its mouth. Fish on!

And so began my fight with the shark. Actually, it's more like a tug of war; you let the fish take what he wants --- while holding the rod to keep up the resistance --- until you feel him weaken, then pull the rod back, and reel in the slack. People who don't fish don't realize that the actual line does not bear the entire load of the fish's weight. You can catch enormous fish on line that's only tested to 20 pounds. Fighting a fish is a competition for who will become exhausted first, and the odds are always with the human so it's a matter of time, not strength of line or equipment.

I pulled and reeled this fish for some time. My head was spinning with excitement and my back and arms were beginning to ache. At this point I had no idea what was on the end of my line. It could be anything. That's the thrill of the whole matter. Whatever was on my line would pull when his energy got up, and I'd pull him in a few more feet when I couldn't take it. This process went on until I could finally see splashing in the dark at the shallowest part of the breakers.

I started to run toward the shape, taking in the slack line. As I approached, I could see a three-foot shark swishing its tail back and forth so I grabbed the steel leader and hauled him onto dry sand.

God damn, I was so excited but there was no one to witness it. Screw it, I'd carry that sonuvabitch back to the house and wake them all up with this beast dangling in their faces.

As I finally cleared the dunes and made it to the house carrying the shark by its tail, I saw that Chris and Brian were still up watching TV. I trudged in without hosing the sand off my feet, screaming and shouting for everyone to get out of bed and come see my conquest.

Watching their expressions was worth all the effort. I posed for a quick photo session from three cameras, then ran back down to the beach to huck the fish back. He hit the water and swam away.

Me, at 2AM, running on dark-n-stormys and late-night excitement: 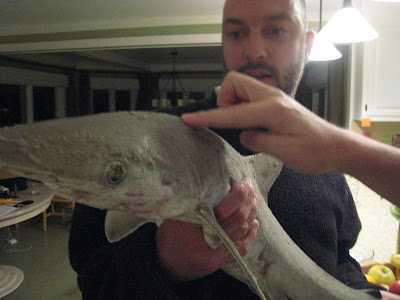 Comments:
LB, great story. I love the part about waking up people to show them the shark. That, my friend, is pure shore fun and I am sure will be a great memory for future story telling.

I forgot to mention, if that is the real hook you are alluding to in the story, you should put something into the picture for size reference, people like to use coins. How about a penny? ;)

did you throw the shark at anyone? That would be funny!

Your enthusiasm is contagious. I would love to be there with the darknstormy's, a line in and all those stars.

Thanks guys. Wish you'd been there too. No, didn't throw any sharks at anyone this year.

Shrubs, I didn't take the picture but that hook is about 3 inches from bottom to top.

Thanks for breaking up an otherwise terrible afternoon. Great story. Sandshark?

Thanks. And yes, a sand shark.

LB: It was an honor to assist. Just a beautiful night and so cool to see that thing precede you into the house like Jaws back from the depths. Cannot believe I bailed 5 minutes before the main event.